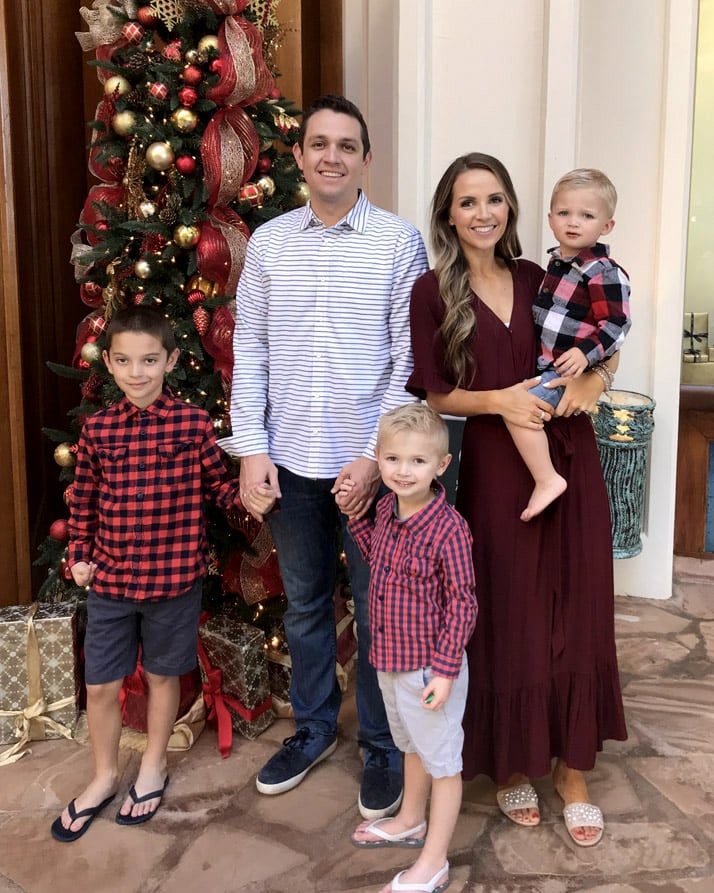 Last Christmas, Philip and I had the idea to spend Christmas in Hawaii. It took us about ten seconds before we decided to go for it. Neither of our families had ever done destination Christmas’s before so we weren’t sure what to expect, but it turned out to be our favorite family Christmas so far!

Today I want to share a bunch of photos and all the details of our stay! 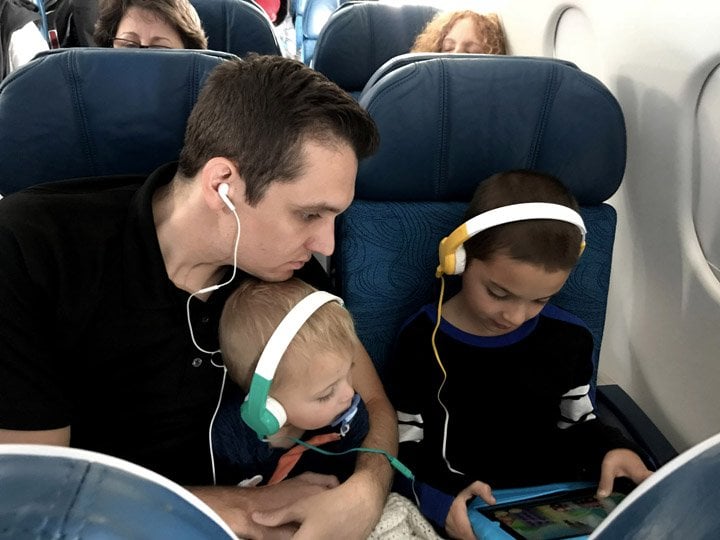 A six hour plane flight with three little kids was definitely the biggest hurdle, but we came very prepared thanks to all the tips in this post. I also compiled a list of apps that work without wifi and shared those on my instagram stories (it’s one of the saved highlights in my profile — if you don’t see the highlights, update your app and you’ll see them!)

We brought our iPad and downloaded a bunch of apps there, plus I signed up for a free trial membership to Youtube Red and downloaded some Art For Kids Hub drawing videos, and downloaded a couple of Netflix episodes in the Netflix app. Those two things kept my boys entertained for hours. We also used the BuddyPhones headphones for kids so they could listen to the same device at the same time. They’re only $20 here!

For San, he was less entertained by devices, so we made sure to bring lots of snacks, his blanket, pacifier, and a bottle of milk, and then I bought him this sticker book and a magnadoodle, and those kept him pretty entertained. Also Philip sat in the row behind me so he had fun just going back and forth between rows over and over, checking out what the big boys were doing. And he napped for about an hour on each flight there and back. 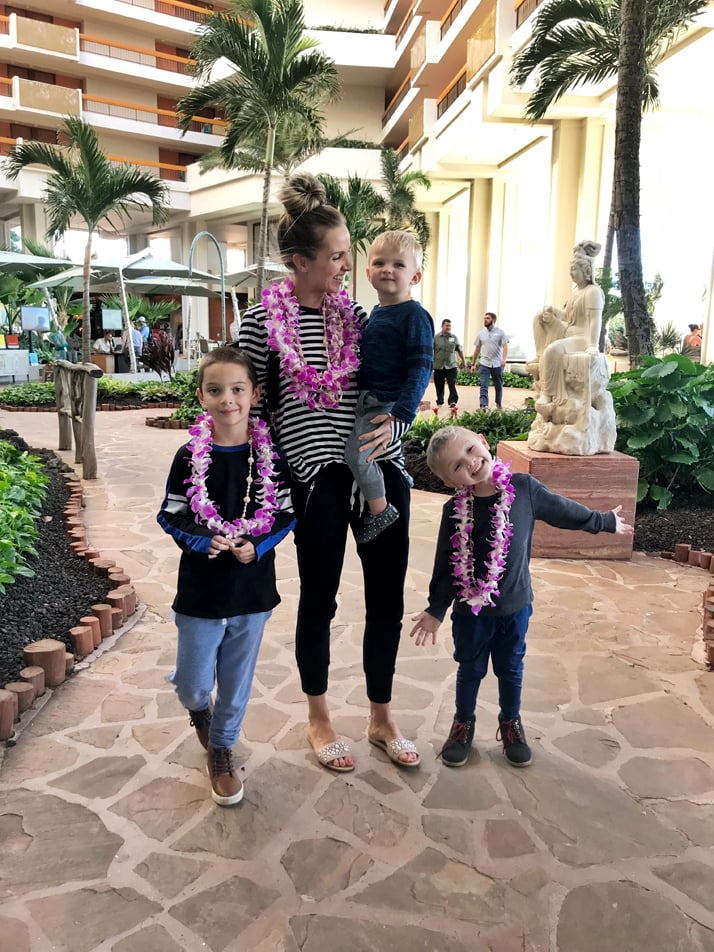 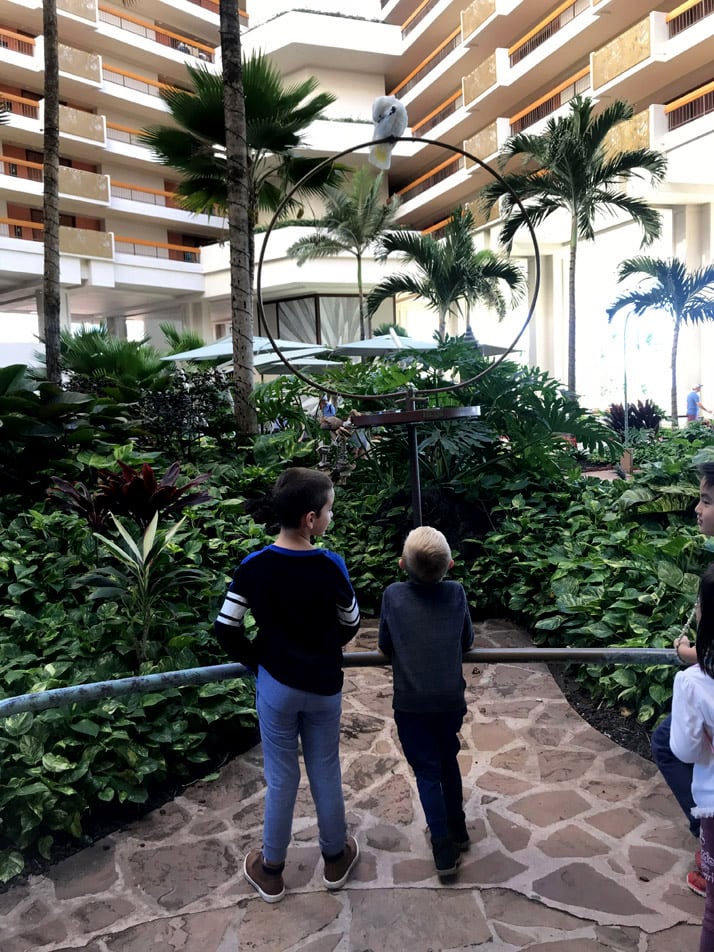 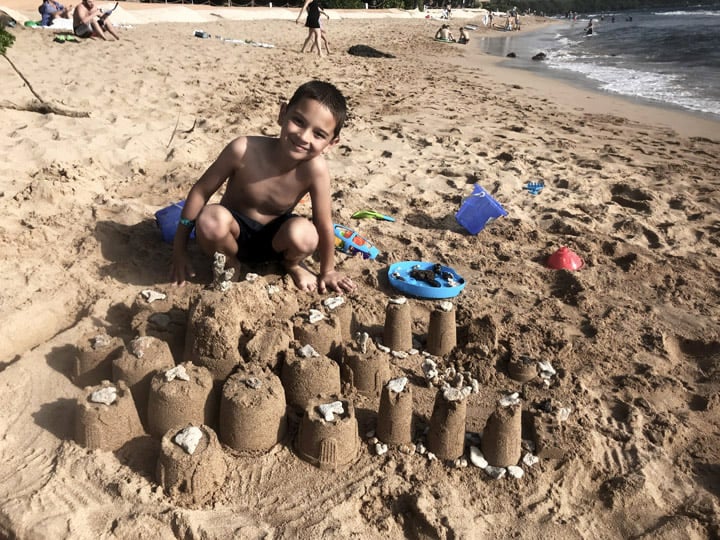 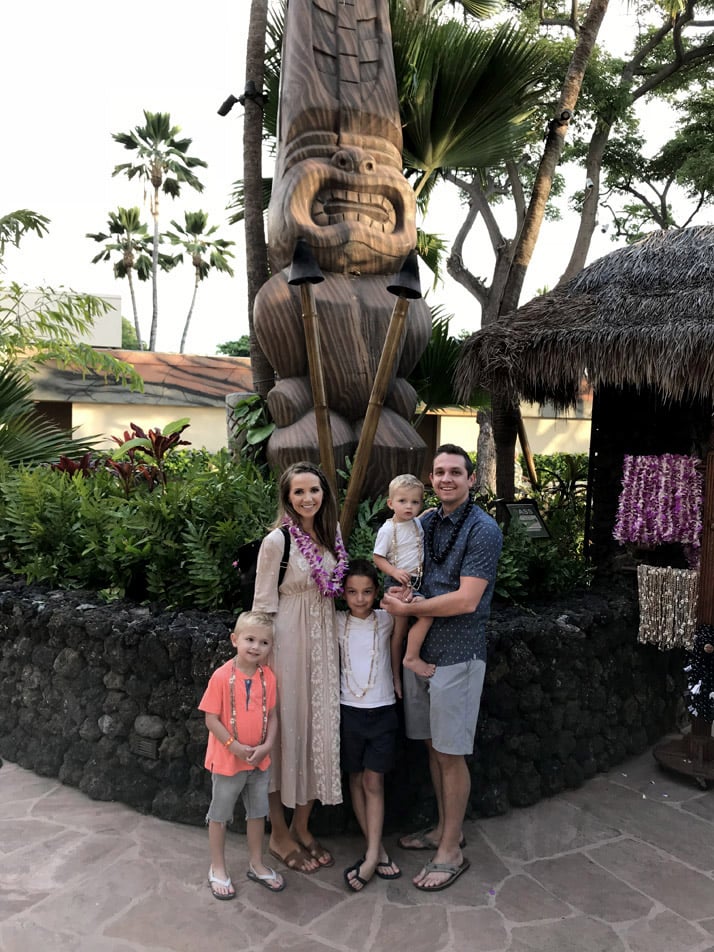 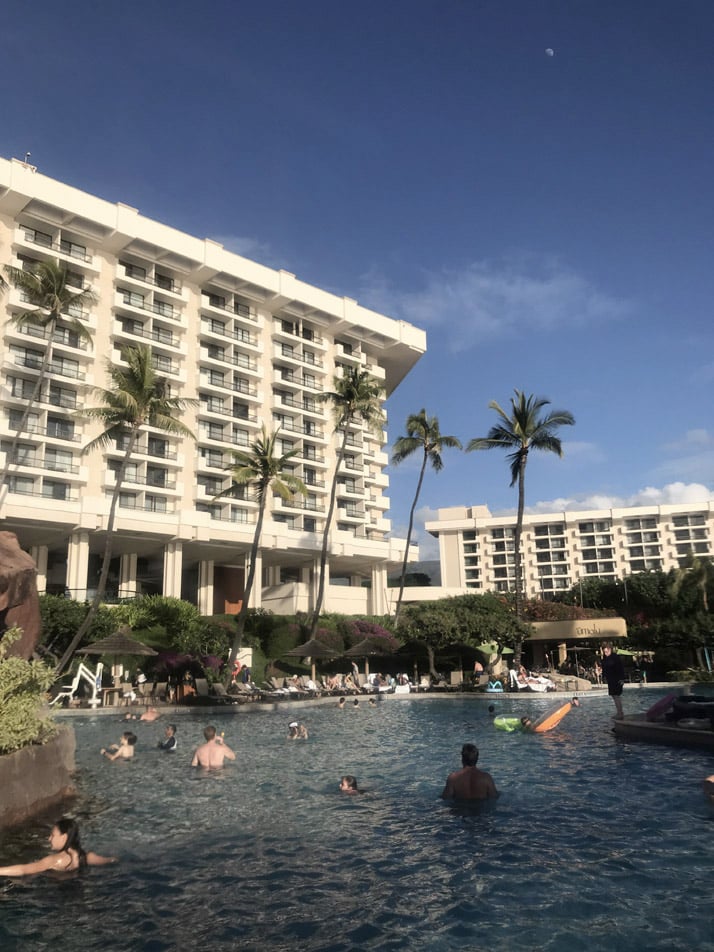 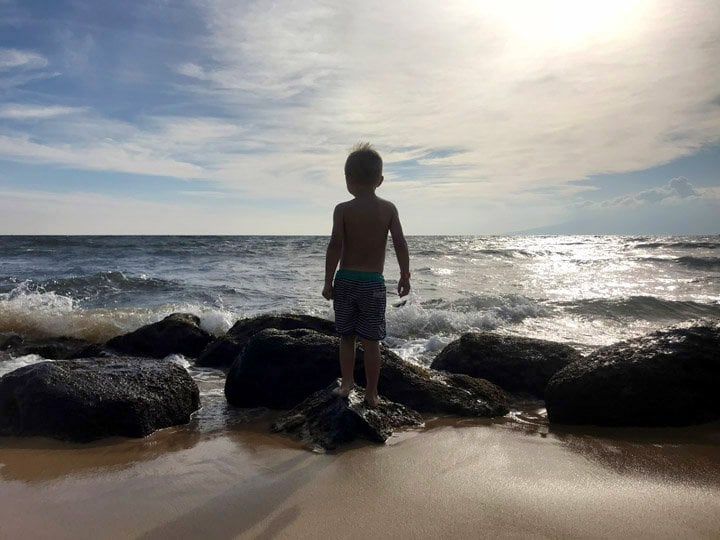 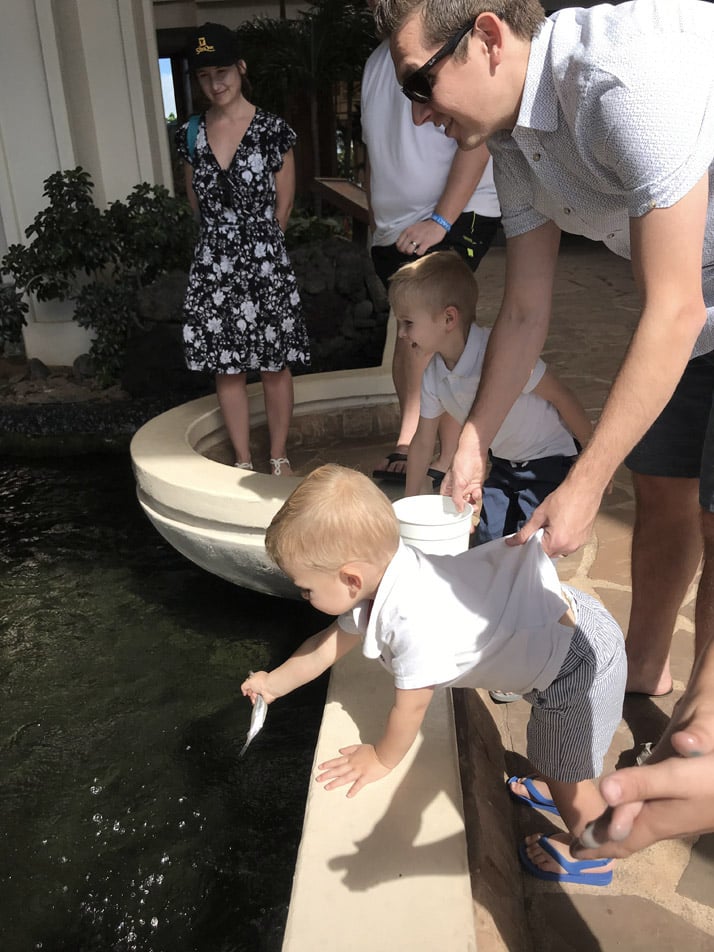 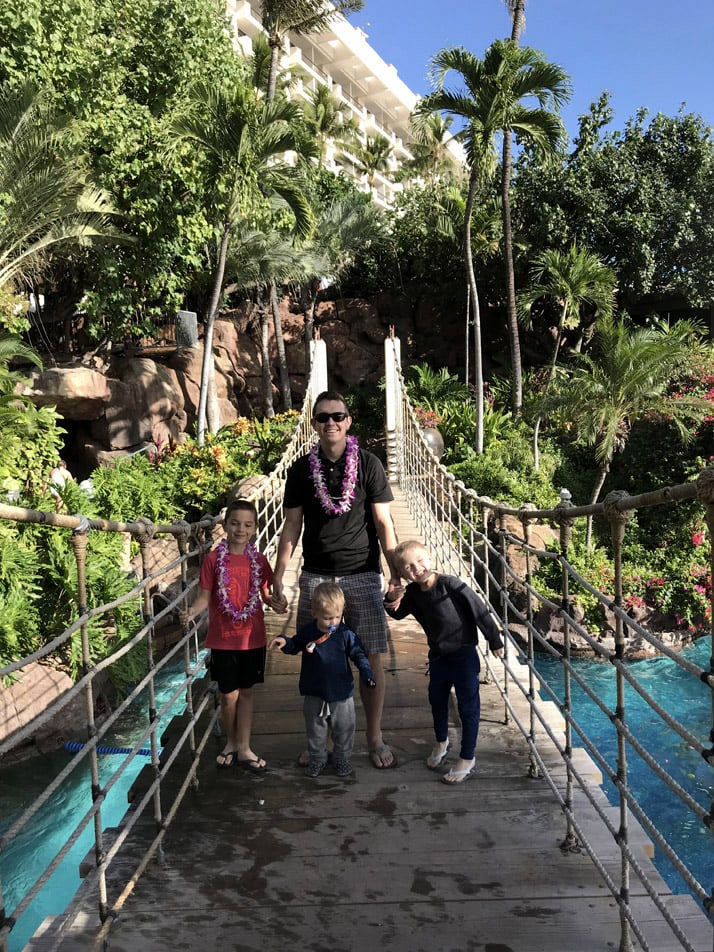 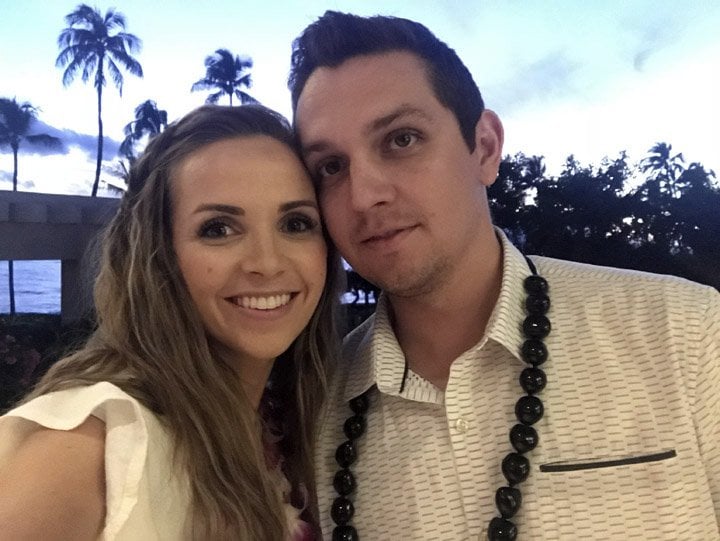 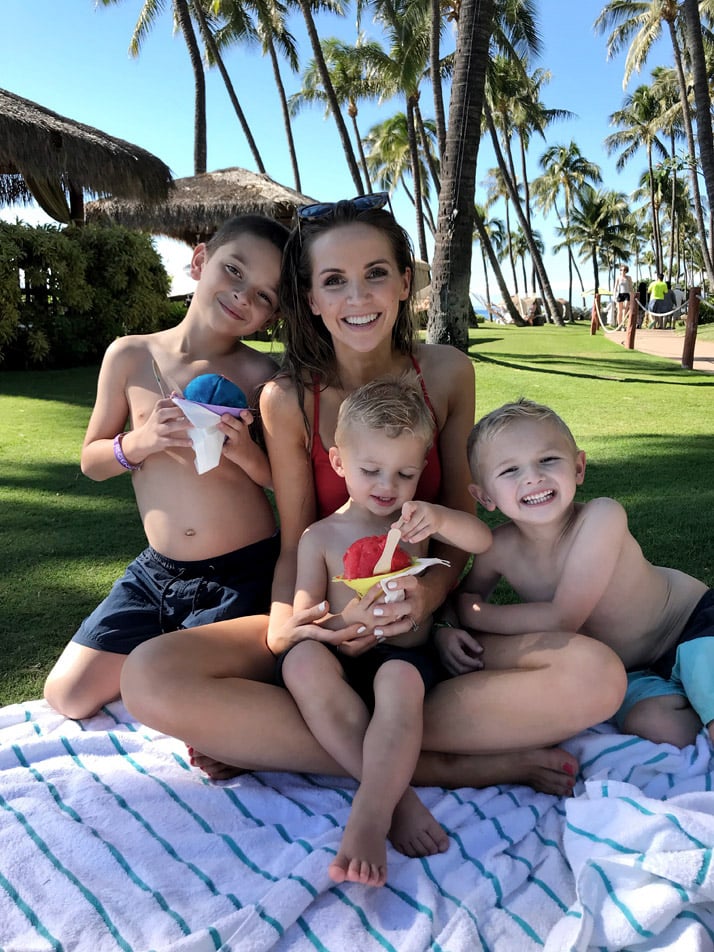 We stayed at the beautiful Hyatt Maui Resort and Spa , and it exceeded all of my expectations. Philip and I mentioned so many times how family friendly it was, how spectacular the property was, and how many amazing amenities it had.

The gorgeous lobby was open and filled with exotic plants and flowers, beautiful birds that talked to us, warm weather penguins (that we got to help feed one morning!!), lots of lookouts and lounge areas, and then so many restaurants and shops right on the property.

There were two pools on the property — the main pool and the kid pool, and they were attached by a grotto that you accessed by going under the waterfalls on either end. There were two water slides, a large hot tub, and then the beautiful beach just ten yards away. Oh, and the residence club was right next door and we had access to that pool as well!

The hotel had a Kids Club on property, which we sent the two older boys to on our anniversary so we could have a little date night (with Sanny as the third wheel), and we also spent one evening at the famous Drums of the Pacific Luau which was both delicious and spectacular. B was obsessed with the fire dancers!

On Christmas Eve we went up on the roof of the hotel for the Tour of the Stars. We learned about the sky and the stars, and got to look through high powered telescopes to see the moon, the North star and a few other constellations.

Last but certainly not least, the hotel had a Ululani’s Hawaiian Shave Ice stand right by the pool, so we visited that almost every day. We’d never had shave ice with ice cream underneath and whoa — it was so good.

On our first full day in Maui, we went over to Lahaina Harbor to go whale watching. We booked our tour through Makai Adventures and had such a blast. We saw tons of whales, the tour was only about 15 people so there was lots of room and it was easy to see the whales, and we learned a lot from the guide and the boat captain. Definitely recommend this tour! 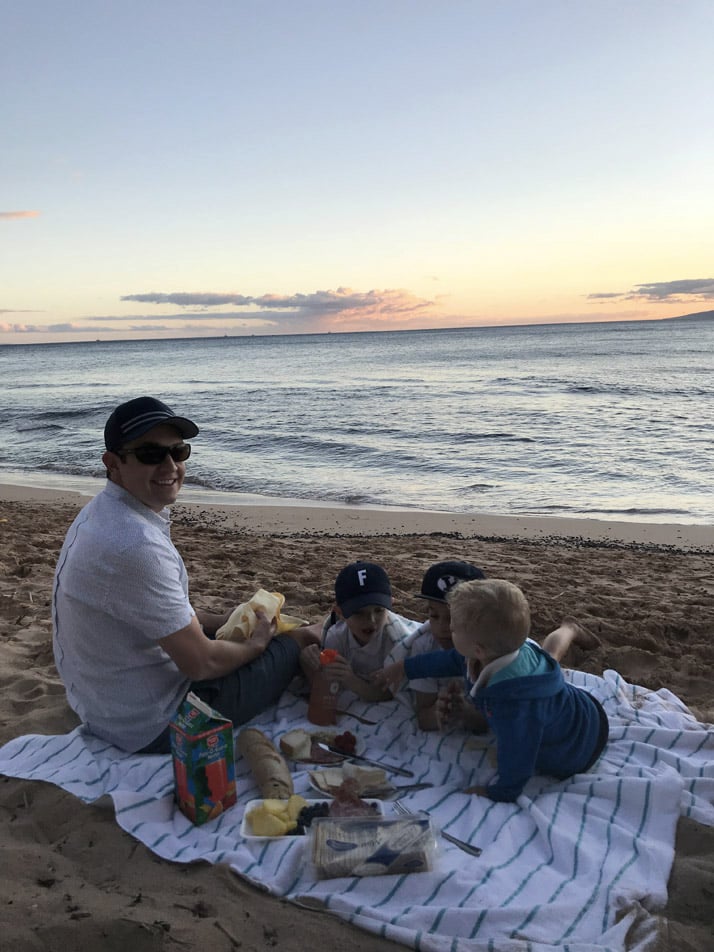 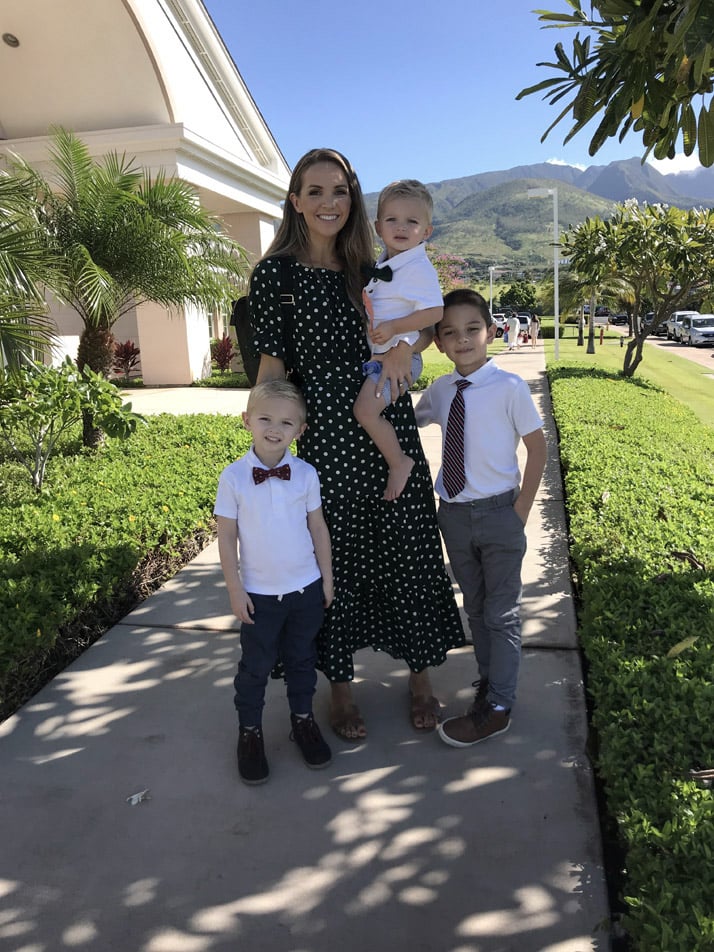 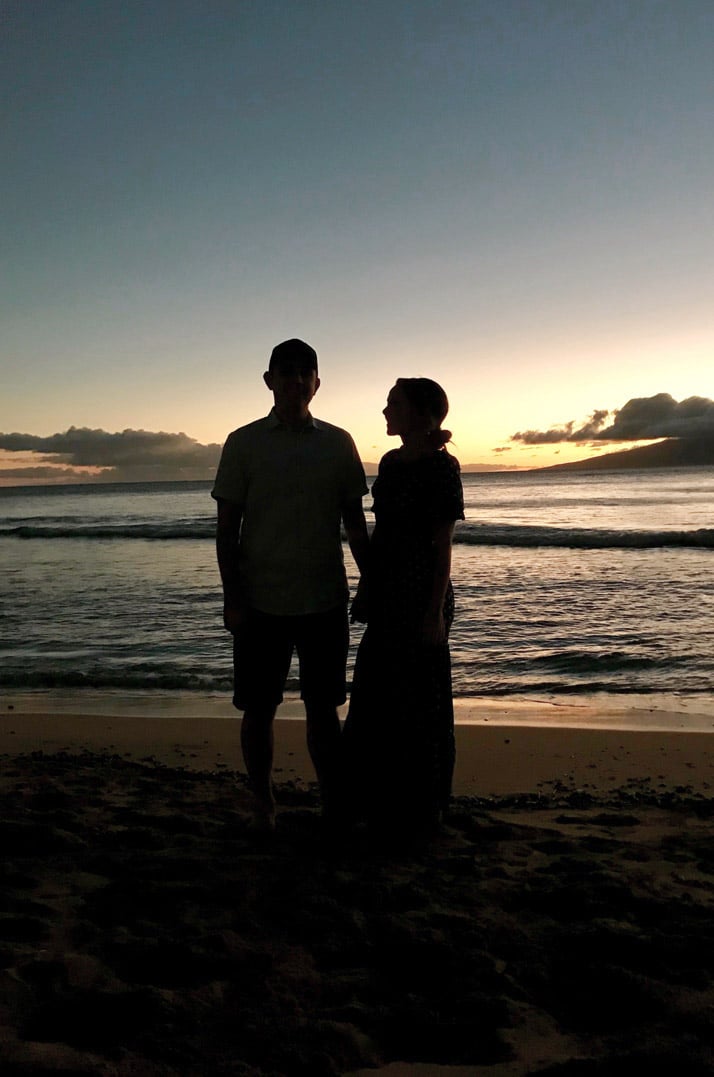 Christmas Eve was on Sunday, so we went into Lahaina again to go to church, and then came back to the hotel and spent the rest of the afternoon and evening on the beach.

Ever since we moved to California we’ve spent every Christmas Eve on the beach, so it was fun to carry on our tradition even though we were far from home.

We made a delicious charcuterie and cheese picnic for dinner and ate it while we watched the sunset. 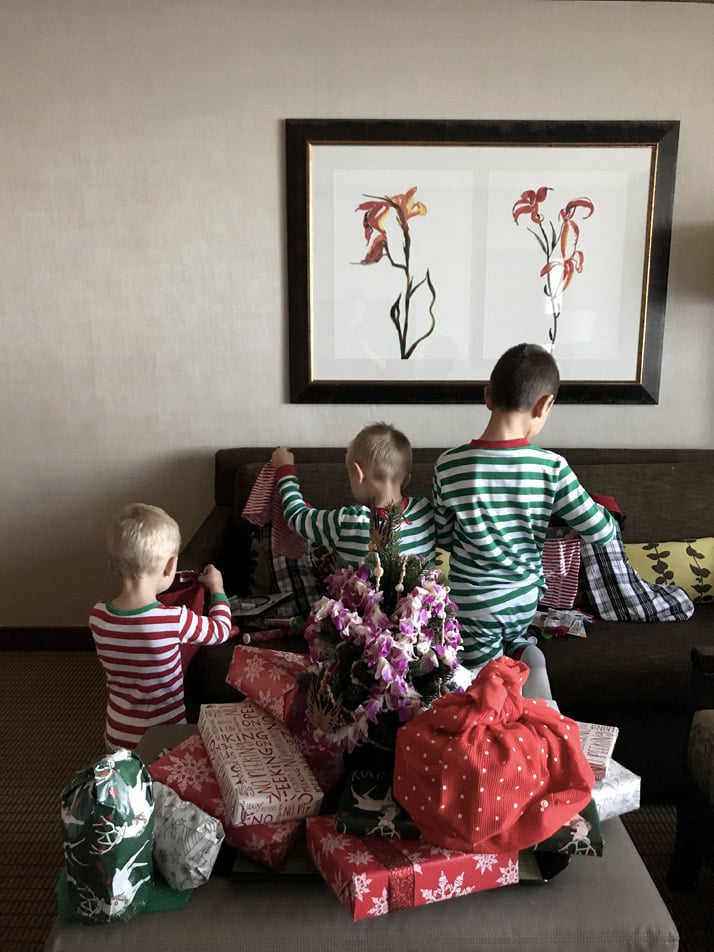 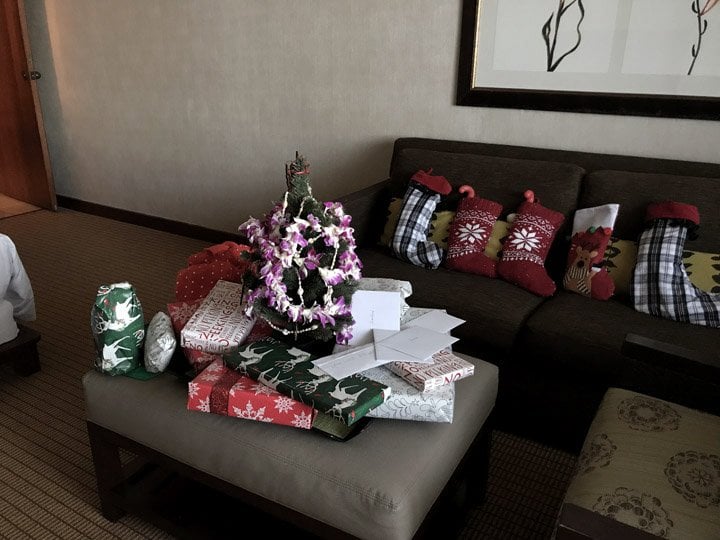 One of the questions I received the most in regards to this trip was about how we handled Santa and Christmas morning.

B has been very skeptical about Santa for about three years, and Fos believes but isn’t obsessed, so Philip and I don’t push Santa on them. The only things from Santa are the little things inside their stockings — no wrapped gifts from him. So that makes it easy for our family, but I know most families do it differently so hotel Christmas might not be as easy for others.

We did three presents for each of the boys in Hawaii, and Philip and I exchanged one gift each, and of course we reminded them many times before and after that Hawaii was their big gift, and being able to spend uninterrupted time as a family was the best gift of all. As long as they each got a Lego set, they were totally good with this and were so grateful and happy the whole trip.

After we finished gifts, we had a beautiful Christmas brunch in one of the hotel restaurants, The Swan Court, and then spent the rest of the day at the pool and the beach. That night we dressed up and went to a really nice dinner at Japengo, which was also on the property.

I put together a fun little video of our time there. It’s always a lot of work to film and edit these videos, but when they’re done I’m SO glad I did them because they bring back all the fun memories and help me remember these perfect moments with my sweet boys.

p.s. I’ll be sharing all of my outfit details on my blog post tomorrow!

A huge thanks to the Hyatt Maui for an amazing stay!